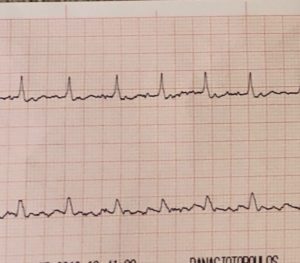 One of the most common arrhythmias in our days is atrial fibrillation. It is very common in older people but occurs at younger ages too. It is very annoying  for the patients themselves, their families and the health system. This is why frequent follow up, medication and, in many cases, hospitalization are needed.

What is atrial fibrillation? In order to understand it we should have a basic knowledge of how the heart’s electrical system works. The heart, an organ that works 60-100 times a minute for the rest of our lives, has a wise electric network. There is a point of production of electrical stimuli called  sinus and this is the conductor. The sinus produces rhythmic electrical stimuli that are transmitted through circuits throughout the heart. It is in an area in heart which is called the right atrium. If this conductor is sick and can not produce as many stimuli as the heart needs to feed the body properly, there is a serious problem. Then in its place it begins in full anarchy, all atrial cells produce stimuli. This causes a complete arrhythmia called atrial fibrillation.

Atrial fibrillation is the rapid and irregular functioning of the heart due to its unusual production of sinus cells. The patient feels his heart beating irregularly and quickly. This is described as “fluttering” and is very embarrassing. It may initially appear for a few hours or hours, and then the rhythm is restored. This is called paroxysmal atrial fibrillation and may occur when the person calms and creates a very unpleasant feeling. At some point this arrhythmia can become permanent, so it is called chronic atrial fibrillation. In both cases the performance of the heart is reduced and the patient feels a discomfort. Discomfort is caused mainly by tachycardia.

If the patient is very old and has severe heart failure can lead him to severe dyspnoea and pulmonary edema. But the big problem is that because of the unintended production of the stimuli, the atrium does not contract properly, creating glands (thrombi) in the heart. These can be moved to the vessels causing embolism, blocking of the vessels. Thus, they occur as strokes, emboli at the extremities, mainly in the legs and other organs e.g. intestine (a serious disease that destroys it).

Depending on the cause of atrial fibrillation, it is classified as secondary or idiopathic. It is called idiopathic when there is no apparent cause of it. Secondary is called  when it is caused by valvular diseases, heart failure, dilation of the sinuses, etc. It is important to investigate the causes and this leads us to treatment. Examinations such as the triplex- ultrasound of the heart, the 24-hour Holter rhythm monitoring, and the investigation of arterial hypertension with 24-hour Holter pressure  monitoring give many answers  to the experienced cardiologist. Do not forget yet that atrial fibrillation causes some  thyroid diseases.

Medication includes medicines to prevent arrhythmia, regulate heart rate, and prevent clotting (anticoagulation). If these do not give solutions then there is ablation the  electric catalysis with a high current which is an invasive method that has specific indications. Atrial fibrillation, is the cause of many strokes and embolism in vital organs, also involves a number of other medical specialties that have to work with the cardiologist to avoid these serious complications.